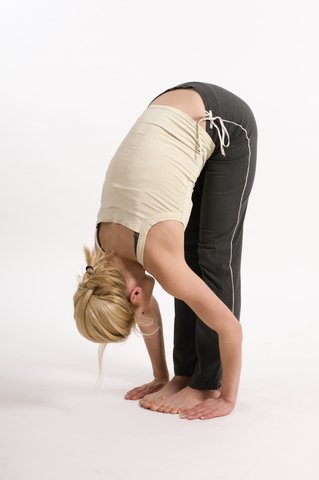 Dan started by inviting me to teach yoga at his studio. The first time he asked me my answer was an easy “no. “ But a year later he asked again.

I’d been practicing yoga very irregularly since the late 70’s.  But it was 1993. For a couple of years I’d been attending yoga class two to three times a week and had a regular home practice. Plus I‘d started working in my massage business full time. The timing was perfect for me to start teaching.

I said “yes.” Then time passed. One day Dan asked how “we” were going to get me to teach. My response? “I don’t know how to do headstands.” His response? “Don’t teach headstands.”

The next week during a class I was attending he asked if I could move my mat to the front of the class. That way he could adjust students as I demonstrated the poses.

At first I was aware of being in front of the class, but then I focused on the yoga and it was okay. Then he asked if I could teach the beginning of a class the following week. I’d been offering guided mediations for years in other settings so that was easy.

The next week he had me teach the end of a class. Then when I’d taught the middle of a class on week three he announced that I had now taught a full class so was ready to sub for him. My thought was “What just happened?”

I went on to complete both yoga teacher and yoga therapy trainings, but Dan’s trick got me started.

Since then I’ve let fear or limiting beliefs stop me in other ways. “I don’t know enough, the timings not right, someone else is already doing this work, blah, blah, blah… “ At those times I’ve found Dan’s trick a handy part of my toolkit.

I wonder if you ever let yourself get stuck by outdated ideas about who you are? Or how about beliefs about “competition?” Or feelings of not knowing or being enough? Or other beliefs about lack and limitations?

I wonder if Dan’s trick might work for you? Can you trick yourself into action by taking on one very, very small piece of what scares you? Whether you’re starting a brand new business or working on a project within your business you probably have experienced getting stuck. Give this trick a try and join the conversation here.