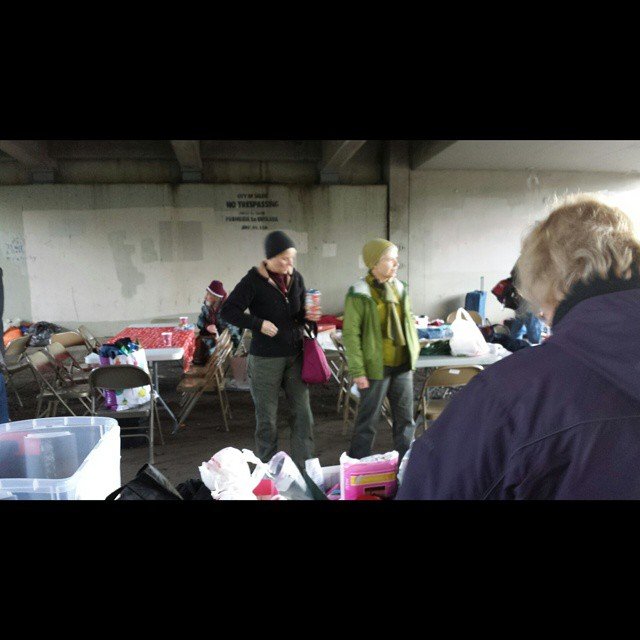 Don’t Give Up on Your Dream

For some time I’ve wanted to make a contribution to my community on Christmas day. I found offerings that happen around the holiday, but not on the 25th.

But this year my friend Kristel posted on Facebook that she was going to distribute stuff to the homeless on Christmas day. All by herself. She had the impulse and she was acting on it. A quick post to her page and I was in!

Kristel had decided to make something happen and that something quickly became bigger than just her. Even as we cleaned out our coat closets and shopped for food and personal items others offered to help.

I also learned of Kathy and her Project Burrito. She and her group of volunteers cook breakfast burritos and distribute clothes, hand warmers, and other needed items to the homeless on Christmas morning. Kristel’s posse, now seven people, joined up with about 15 other volunteers at 8 in the morning under the Marion Street bridge, a place near the local men’s mission and a park frequented by the homeless.

Since most of the volunteers stood behind the tables laden with donations helping to keep the tables neat, replenishing the items, or serving coffee or burritos I decided to mingle among the homeless.

After saying Merry Christmas I’d ask them if there was anything in particular that they were looking for and then help them find it. One man I spoke with was elated to find a belt. Another wanted candles (he was happy with the sterno) for heat and light. My partner saw a man setting on a bench in the adjacent park, a big smile on his face, putting on his pair of new socks. A gentleman with twinkly blue eyes simply smiled and said, “This IS Christmas.”

I help people live their purpose. Sometimes that means getting clearer about what their purpose is. Sometimes it means helping people figure out how to take action, to get rid of what’s blocking them. And other times it’s about finding a way to take care of themselves in a way that supports their purpose rather than sabotages it.

For me the message in this experience was that one person, like my friend Kristel or Kathy the burrito lady, can make a huge difference by acting on their desire to help.

I’m taking that realization into the New Year as I plot my course for the coming year.

If you’re like a lot of people you’re at least thinking about how you want 2015 to be different. You might be putting together intentions or a plan for the coming year.

I invite you to include something that you feel inspired to do as you look ahead. Maybe your idea has seemed too big. Maybe you hit a roadblock when you started. And maybe you worry about what others will think. I encourage you to move past the things that get in your way.

Kathy told me that the Christmas morning group served 75 burritos, 120 cups of coffee, and gave away 20-25 gift bags and backpacks with personal items, food, and/or clothing. One man told me there was nothing he needed. He was happy simply to have wandered into the event and been part of it.

So what about your idea? What can you accomplish?