Traffic Jam and a Roadblock 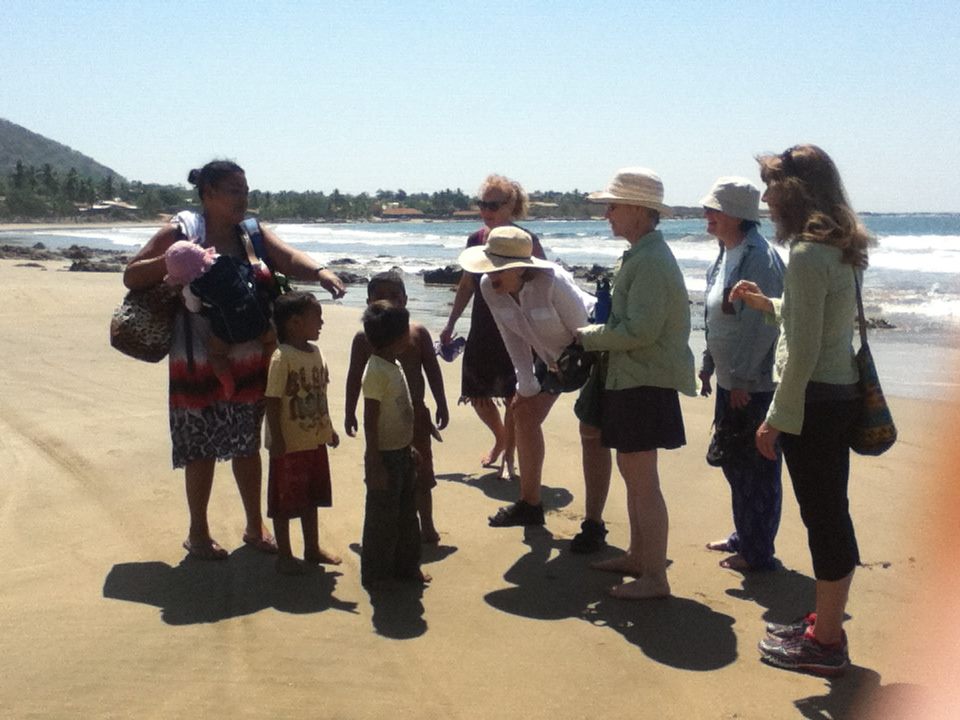 I invited the participants in my recent Mexico yoga retreat to bring along some school supplies for Majahua, the local village. I’d seen the school and the poverty and knew they could use them.

Now we had plenty of school supplies. I needed to figure out how to get them delivered to the school.

One day on my way to do some errands for the retreat I got stopped in the best traffic jam ever.

If you were to see this village, just the idea of a traffic jam would make you laugh. Picture about 20 small homes and two little tiendas that sell chips, candy, pop, a few canned items, and a small quantity of produce.

Even slow traffic stirs up dust on this narrow winding dirt road. Speed bumps are made from either a large rope or the bark from a palm tree. Hot, tired dogs lay beside, and sometimes in, the road. People

walk around the dogs as they head to work, to a neighbor’s, or on their way to buy some fish.

As I entered Majahua, school had just been released. The road was lined with pairs and groups headed home, a brother and sister, a mother and her two little ones, a trio of boys laughing…

Next I saw two piglets dart into the road. When I saw the trash truck headed toward me filling the narrow row I pulled over knowing I wasn’t going any where for awhile.

Jose, about eight years old and neatly dressed in black slacks and a white button down shirt, approached my car with a big grin and an “hola.” He asked how I was.

So I inquired if the teachers were still at the school. “Si.”

After Jose left I chatted with other kids, completed my errands, and then stopped at the school.  I arranged with the principal and only teacher to come back on Friday with the school supplies and some of the women from my group. The ladies were eager to meet the kids and be involved in handing off the supplies.

Thursday evening our entire group headed to La Mexicana restaurant in Troncones for a traditional meal (my first time for pozole) and to watch regional dancing. We were surprised as we drove back through Majahua to be stopped by a roadblock.

It was dark and at first hard to see who held the rope across the road preventing us from moving on. But as we stopped we saw a petite girl of about five held one end. The other rope holder was a girl of ten. The coffee can they held out explained that they were collecting funds so that the bathrooms in the school could be repaired. El banos weren’t currently working. I deposited some coins and told them we were going to be visiting the school the next day. The elder rope holder and keeper of the can explained that there was no school tomorrow.

My first thought was, “how do I say “ah oh” in espanol.” My ladies were leaving on Sunday. I could drop things off the next week, but that meant they wouldn’t get to be involved.

The following day we walked down the beach to Majahua to have lunch at Marta’s, one of the beach side restaurants. On the way we ran into Angeles, a cook at the resort where we were staying, plus her children, and a nephew. She explained she had the kids today because, you guessed it, no school.

As we chatted one of the boys began to write letters in the sand.  Angeles explained he liked to write.

Later that day we delivered to Angeles a custom designed bundle of paper, markers, crayons, even a book for her to read to her six-month-old baby.

At Marta’s we met Victoria, a ten year old who was helping dad because there was no school. This time we were on it. “Do you like to read?” “Not really.” “How about drawing?” “Yes.” You could see the excitement in her eyes.

Guess what Victoria got later that day? A bundle with art pad and pens selected by Beverly along with some things for Victoria’s younger sister.

We had enough that every staff person with children where we were staying was able to choose something for their child or children. And we still had plenty left for the school.

The lesson for me (not the first time I’ve learned this lesson) was to not be attached to the outcome. How I saw things unfolding was not how it happened. What happened was way better. We got to really connect with some individuals. We got to give back to people who had been serving us all week. We got to offer something to this community with which we’d fallen in love.

My work is to remember this lesson, or at least be open to re-learning it again. Act where I feel inspired and then let go. Let something or someone greater offer a traffic jam, a roadblock, a better way. And then go along for the ride.

And you? Is this a lesson you’ve learned (or relearned) like me? I’d love to hear your insights and examples here.

And if a yoga retreat to Mexico is calling your name head here.